STOK KANGRI WITH THE MARKHA VALLEY

The Markha Valley epitomizes the best of Himalayan scenery. With giant rock pinnacles, sheer cliffs, narrow defiles, prayer-flagged passes and evidence of a very old civilization, the history of which has been lost in antiquity. As you trek up the Markha Valley, you will see the ruins of many forts and castles, some built in some very unlikely places!

DAY 1: ARRIVE DELHI. Our Local representative will greet you at the international airport and help you transfer to the hotel.

DAY 2: FLY TO LEH. You will have an early morning transfer to the domestic airport for the flight up to Leh. This surely is one of the most sensational scheduled flights in the world, taking you right over the top of the Greater Himalaya before dropping down in a series of steep turns, to land at the small military airport at Leh. Flight time is about 1 hour. You will be met on arrival and driven through Leh to check into your Hotel. Leh is at an altitude of 11,500 ft and therefore we recommend that the rest of the day is spent resting as it will be necessary to adjust to the altitude.

DAY 3: AT LEISURE IN LEH. Again we will take it easy today and your guide can show you around town. Leh is very Tibetan in many respects; the national dress, 'stove-pipe' hats and felt boots with turned-up toes are much in evidence. The Royal Palace which dominates the town is very reminiscent of the Potala in Lhasa and Tibetan Buddhist monasteries, large chortens, prayer flags and mud brick houses with flat roofs are a dramatic culture change from the hot, teeming frenetic rush of Delhi. Don't try to do too much on this first day! Visit the palace, poke around the bazaars, and if you're feeling really keen and strong, walk out to one of the villages just to the north.

DAY 5: DRIVE TO PHY, TREK TO ZINGCHEN. After breakfast we drive to Spitok Gompa (approx. 1 hours) for a visit. This monastery was built about 500 years ago by Gyalpo Bumlde, although one temple, dedicated to Mahakala was built about 900 years ago. About 125 yellow-hat sect lamas are considered Spitok Lamas, but at least half of them live and pray at Spitok's dependent monasteries at Sankar, Stok and Sabu. All the lamas do however gather together for major festivals. The name Spitok is probably derived from the Central Tibetan language and means, Effective as an Example, referring to the fact that this was the Tibetans first monastery in Ladakh. The head lama for Spitok was the head lama for Ladakh and represents Ladakh as a member of Parliament, spending much of his time in Delhi. Spitok Gompa contains both old temples and those built in the 1970s. Ancient thankas are preserved there, some having been taken from the Potala in Lhasa after the Chinese invaded Tibet. After leaving the gompa, we cross the bridge over the Indus river and meet up with the horseman. The trek begins here and follows the Indus for a short distance, before striking out for the mountains. You soon enter the narrow gorge that leads to the first camp at Zingchen. There is an option to drive to Zingchen and camp.

DAY 6: TREK TO YURUTSE. (6 hours) You will follow the trail beside the river till the valley widens at Rumbak, where you can see the snow-capped peaks of the Stok mountains. Take the right fork of the river and continue to the very small village of Yurutse. The purple and green rock formations are quite impressive. Continue past the village to the base camp of Ganda La.

DAY 7: TREK TO SKIU. (3370m/11,050ft) (7 hrs) The climb over the Ganda La is not as steep as that up to the Stok La, but it is a bit longer. From the top of the pass there is a fabulous view of snow-capped peaks. The descent into the Skiu valley is steady. The wide pastures at the top of the valley close into a narrow 'waist' at Shingo, where there is a stream junction and a few houses and fields. From here the river swoops exuberantly down the tight narrow gorge choked with willow and wild rose, with the trail following, swapping from bank to bank as it goes. The village of Skiu is at only 9,900 ft, and the Markha Valley here is narrow, so the temperatures can soar. We camp at Skiu, and at dusk it is worth climbing back up the valley to where the Skiu Nala meets the Markha river. Here there is a small monastery cared for by an old nun who comes every evening to light the candles at the altar of 'Chamba', the future Buddha.

DAY 8: TREK TO MARKHA. (3568m/11,776ft) (6 hrs) This day includes a very pleasant walk up one of the loveliest sections of the Markha Valley. Woody bushes grow thickly along the river which is spanned by several bridges over which the trail marches to Thinlespa. The camp is beyond this small village on the right bank of the river, just before the village of Markha.

DAY 9: TREK TO THACHUGTSE. (3963m /13,078ft) (6-7 hrs) The trail continues eastwards climbing steadily up the valley through the picturesque village of Markha, which has a fascinating monastery well worth a visit. Coming in from the south is the trail from Rubering La, one of the routes from Zangla. From Markha the country changes and the warm, relatively heavily wooded section of the lower Markha is left behind. Between the twin villages of Lower and Upper Hankar is a ruined fort, the walls of which climb sharply up a crag to an aerie of a lookout tower - worth visiting for those with a good head for heights. Follow the Nimiling river up the narrow valley to the camp at Thachugtse. It will be considerably cooler here. Or Option camp at Hangkar.

DAY 10: TREK TO NIMALING. (4877m/ 16,097ft) (3 hrs) The trail continues to climb up the valley to a picturesque lake with a reflection of snow-capped Kang Yatse, the highest peak in the Zanskar range. From here the Nimaling plain is a broad undulating meadow which slopes upwards to the base of the ice-clad Kang Yatse which dominates the area. Nimaling, with tiny ponds and rivulets flowing all over its meadows, provides pasturage in the summer for an astonishing number of animals; yaks, sheep, goats, dzos and horses, not only from the Markha but also from villages all around. Himalayan marmots and white-tailed hares are seen in plenty and it is not unusual to spot the occasional blue sheep or wolf. You should reach camp in the early afternoon and have the rest of the day to relax and explore.

DAY 11: TREK TO CHOKDO. (3976m/13,123ft) (5- 6 hrs) After crossing the Nimaling River, climb to the top of the highest pass on the trek, the 17,409ft Kangmaru La with its wonderful views from the top. Snow peaks in every direction, and on a clear day the giants of the Karakorams, including K2 can be seen on the northwestern horizon. The trail descends steeply to the head of the Martselang valley past the sulfur springs of Chyushkarmo, camp at Chokdo.

DAY 12: TREK TO SHANG PHO. (4324m/ 14272ft) (6 hrs) The trail turn west through uncharted territory and crosses a few smaller passes to approach Shang Pho, where people from Shang village stay with their animals during the summer months.

DAY 13: TREK TO GANGPOCHEY. (4294m/ 14173ft) (6-7 hrs) The trail climbs up towards the Shang pass 16700 ft. This day is rugged terrain and the superb open valley of Matho Phu, the summer camp for the shepherds from the village. You will be camping just below the Matho hanging Glacier.

DAY 14: TREK TO STOK BASE CAMP. (4871m/16076 ft) (5-6 hrs) Climb the rocky sloping ground, with a lot of vegetation, where you might see blue sheep and other wild life including marmot, fox and rabbit. Cross the small river then up hill for another hour to the pass. Then follow the slope on the right shoulder of the valley to the base camp.

DAY 16: SUMMIT STOK KANGRI. (6153m/20188ft) Breakfast will be served very early in the morning, at 3 am, then we head off for the summit. We climb west up the obvious slope path to a small pass at the top of the ridge. Traverse southwest along the side of the ridge before a short climb. Scramble over the terminal moraine heading southeast to the ridge. There is a faint path and several cairns marking the route. Then you cross the glacier, avoiding crevasses, and ascend its steep western arm. The easiest way to gain the southeast ridge early on is by climbing the moderate and loose rocks to the summit. You can scramble back to the base camp the same way. 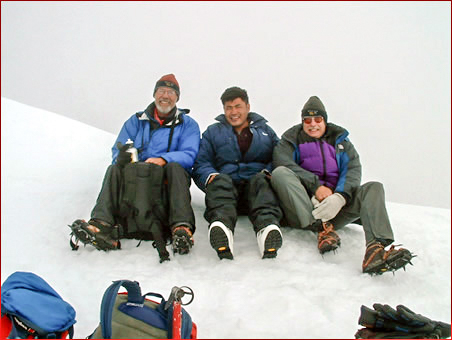 DAY 17: BASE CAMP TO STOK VILLAGE. An easy morning decent to Stok village where a taxi will be waiting to transfer you to Leh.

DAY 18: RELAX IN LEH. You will have a chance to relax in the relative luxury of Leh, and do any last sightseeing and exploring. There will no doubt be a chance to have a final celebration with your guide and crew before the flight tomorrow. In the summer there are often polo matches on a Sunday. Overnight in the hotel.

DAY 19: FLY TO DELHI. Our representative will meet you and transfer you to your hotel.

DAY 20: RELAX IN DELHI. International flights usually leave after midnight, so sleep in and relax. Leave for the airport about 10 pm.


To join the climbing trek, you will need the following equipment. If there is not much snow or ice then we do not need all the equipment but for sure you will need it in the spring: Ice Axe, Crampons, leather mountaineering boots, rope and four season sleeping bag.

IMPORTANT TREK NOTES:
Whilst every effort is made to keep to the above itinerary, clients will hopefully appreciate that this is Adventure Travel in a remote mountain region. There will quite likely be changes to the itinerary in terms of anything from on-the-spot choice of campsite to when a rest day is taken. Weather conditions, road conditions, vehicle breakdowns off the beaten track, local availability of horses or yaks, can contribute to the need for changes. The Trek guide will do everything in his power to see that you are inconvenienced as little as possible in such circumstances. Timings are approximate.