This is a tremendously exciting trip consisting of not just a meditation walk through the Tibetan-Buddhist villages of the former Kingdom of Ladakh. But you will have a chance to get a teaching from a Geshy on spiritual practice. Part of the revenue will be donated to The LOTSAVA MODEL SCHOOL TEMISGAM. Lotsava Model School was founded in October 1999. Its mission was to establish a school in Temisgam to provide quality education including local Ladakhi language. Unfortunately not many schools teach the language any more and the many younger generation people cannot read or write the local Buddhist language. Classes began at the Lotsava School in 1999. Besides language, the school teaches history, Geography, social science crafts, and participation in community events. Now in its third year of teaching, with 55 students, the 5 teacher staff needs assistance with their operations budget for children’s sanitation, books, teachers' salaries, and cultural programs. 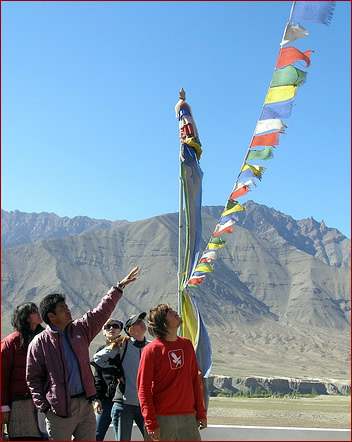 THE FORMER KINGDOM OF LADAKH

Ladakh lies embedded in the mountain world of the Karakoram in the north-west, the Himalaya in the south-west and the Trans-Himalaya at its core. Its position at the upper course of the Indus makes it the important connecting point of the trade route from north-west India to Tibet and to Turkestan. The main chain of the Himalaya prevents the Indian summer monsoon from advancing this far. Likewise the extended cold winter has little snow due to the position of the mountains in the rain shadow. Winter is followed by a short, dry and relatively warm summer. All year-round, however, there are great daily changes of temperature, with strong winds blowing in winter. As a result of the dry and harsh climate, only sporadic high steppes are covered with grass, and arid and semi-arid deserts dominate a nonetheless grandiose mountain world.

Following its demise, the first Tibetan Empire was divided among three brothers in 1020. One of them moved to Ladakh and founded the first royal dynasty there. In the following centuries the Ladakh kings extended their ruling territory. Lhachen Uptala (1080-1110) expanded his kingdom up to the realm of the related dynasties of Purang and Mustang (in present day Nepal). New importance was attached to the culture of the Ladakhi monks when the reformed sect of the Gelugpa, created by Tsongkhapa, led to the re-establishment of monasteries in the 15th century with the division of the empire. Lhachen Bhagan unified Ladakh in 1470 and founded a new dynasty, Namgyal. His successor was able to stand ground against an invasion from East Turkestan. Yet over the years Ladakh was to be plagued repeatedly by plundering, ravaging Islamic armies. During the reign of the powerful kings Sengge Namgyal (ca. 1570 to 1620) and Deldan Namgyal (ca. 1620 to 1660) the empire was not only further extended, but blossomed anew culturally in Ladakh. It came to an end when the Great Fifth Dalai Lama of Tibet (Nawang Lobsang Gyatso, 1617-82) convinced the Mongolians, whom he had converted to Lamaism, to enter a military campaign against west Tibet and Ladakh. The Ladakhi King, Delegs Namgyal, turned to Kashmir for help. In the Battle of Basgo (ca. 1685), the Tibetan-Mongolian army was stopped. Yet from then on Ladakh remained under the influence of the Islamic empire of the great Moguls. Its history remained unalterably tied with the history of Jammu and Kashmir, but the country did not forfeit its Lamaistic tradition.

DAY 1 : ARRIVE DELHI. Our Local representative will greet you at the international airport and help you transfer to the hotel.

DAY 2 : FLY TO LEH. you will have an early morning transfer to the Domestic Airport for the flight to Leh. This must be one of the most sensational flights in the world! On the northern horizon you may be able to pick out K2, the world's second highest peak, and other Karakoram giants. On your left you can see Nun and Kun the highest peaks in Ladakh at 7100m and 7080m. On your arrival in Leh, transfer to hotel. Day at your leisure for acclimatization

DAY 4: FULL DAY SIGHTSEEING IN THE INDUS VALLEY. Today you will spend a full day visiting many of the important places in the wide Indus valley. This will certainly include Shey, - Palace of the old Ladakhi kings, Thikse - a large monastery which contains a three-storey-high statue of Chamba, Buddha of the future, and Hemis - the largest monastery in Ladakh. At the latter, ask to see the temple in the rear, which houses the Buddhas that have in the past 'spoken'. In the afternoon you drive back to Leh. Overnight at Hotel.

SHEY PALACE (15 km from Leh)
The old 'summer palace' of the kings of Ladakh was built about 550 years ago by Lhachen Palgyigon, the first king of Ladakh. It stands next to the remains of a larger construction on the east side of a hill which runs south-east towards the Indus. From the palace you can see over the fertile Indus plain north-east to Tikse Gompa and over the Indus to the Zanskar mountain range. The old Shey palace has the largest golden Buddha statue in Ladakh in its gompa. The statue is worked out of gold and gilded copper sheets, stands 12 meters high and has blue hair. It was erected by King Dalden Namgyal in the middle of the 17th century. The most important moment in the construction of such a figure is when the eyes are painted in and the statue can 'see'. No artist or monk would dare to look the Buddha in the eye so the pupils are painted over the artist's shoulder, with his back to the idol.

THIKSE GOMPA (17 km from Leh)
The 500-year-old Thikse monastery, perched on a hill high above the Indus, has the largest contingent of monks in Ladakh. On the right of the entrance to the main courtyard a new chapel houses an enormous 15 meter high seated Buddha figure. About 100 yellow-cap monks belong to the gompa. If you get there by 6.30am you can witness the daily morning prayers, but there are also prayers closer to noon, preceded by long, mournful sounds from the horns on the roof.

HEMIS GOMPA (45 km from Leh)
Hemis Gompa is famous far beyond the borders of Ladakh for its Festival. This takes place every year with mask dances on the 9th to 11th day of the fifth Tibetan month. Hemis also has a gigantic thangka, one of the largest in the world, which is only displayed to the public every 12 years at the Festival. Hemis Gompa is the largest and one of the most important in Ladakh quite apart from its annual festival. It was founded about 350 years ago by Stagtshang Raschen, who was invited to Ladakh by King Singe Namgyal.

A Buddhist scholar will give a talk and answer questions.
Overnight at hotel.

DAY 5: VISIT ORACLE NEAR LEH, DRIVE TO START OF TREK. We cannot guarantee this proposed audience with an oracle who foretells the future, but if possible we will arrange for you to meet her in a village near Leh. She has such a reputation that local people are afraid to talk to her for fear she will tell them things they would rather not hear. Much of today is free time to be spent doing your own thing.

In the afternoon, you drive to the start of your trek at Ridzong, and on arrival, you walk up to Ridzong Gompa. Ridzong monastery is nestled on a hilltop and is a meditation center inhabited by monks. No local house can be seen except for small Pullus here and there. Visit the Gompa and camp nearby.

DAY 6: TREK TO YANGTHANG. You start the trek to Yangthang. It will be a gradual walk, 3-4 hrs, ascending through a valley until you are near Yangthang, where you have to climb the hill to reach the village. Yangthang is a village with 15-20 houses. Overnight camp at the village.

DAY 7: TREK TO ULE. (12,800ft/3,901m) Another easy trek of 4-5 hrs, crossing by a good bridge you reach a small oasis called Ule. This region is home for the pasture people with their yaks and sheep. During the summertime these people make small Pullus (very small temporary shelter built of stones) and remain there for the entire summer. They come down to the village during the winter with their animals. Overnight camp near Ule.

DAY 8: TREK TO HEMIS SHUKPACHEN. Climb for approx. 50 minutes gradually to reach Sermanchan-La. From here it is an easy descent to the village of Hemis-Shukpachan, a major village the name of which derives from Conifers (Shukpa) that are seen everywhere in the village. There is a beautiful Gompa that you will visit. Here you visit local houses, test local food and beverages etc. Overnight camp at the village. 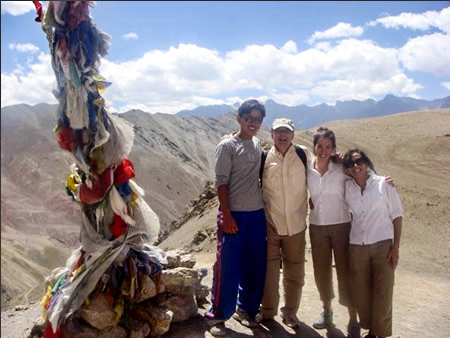 DAY 9: TREK TO TEMISGAM. (4-5 hours trek) Passing through the village the trail then enters a sort of plateau to an ill-defined pass. There is then a steep descent and then contouring to the right around the mountainside. There is another climb to the summit of Meptak La. This is about 2 hours from Hemis Shukpachen. There is then an easy descent towards the village of Ang.You will then have a picnic lunch at Ang. Then another one hour to Temisgam.

Temisgam was capital of Ladakh in the 14th centry. The King Tagspa Bom chose it as the capital of his kingdom. Practice meditation and teaching by lama. Overnight in Temisgam

DAY 10: TEMISGAM TO LEH. Temisgam has a famous palace with a particularly fine statue of Avalokitesvara. This is the Bhudda of Compassion - the Dalai Lama being the living incarnation. Visit Lotsava School before lunch then drive back to Leh which is approximately 3-4 hours. On the way you will visit Alchi, one of the very oldest temples in Ladakh. On arriving back into Leh you check into the Hotel.

DAY 11: DAY AT LEISURE. Continue your exploration of Leh , go for shopping and witness cultural show in the evening.

DAY 12: FLY TO DELHI. Our representative will meet you and transfer you to your hotel.

IMPORTANT TREK NOTES
Whilst every effort is made to keep to the above itinerary, clients will hopefully appreciate that this is Adventure Travel in a remote mountain region. There will quite likely be changes to the itinerary in terms of anything from on-the-spot choice of campsite to when a rest day is taken. Weather conditions, road conditions, vehicle breakdowns off the beaten track, local availability of, horses or yaks, can contribute to the need for changes. The Trek guide will do everything in his power to see that you are inconvenienced as little as possible in such circumstances. Timings are approximate.